No, not that Cinderella story. If you’re here for an insightful analysis of the teen flick starring Hilary Duff and Chad Michael Murray, you’re most welcome but likely to be disappointed. However, if you can forgive the lack of teen angst, read on.

Today’s fairy tale comes to us from a 1911 newspaper blurb. Our heroine is nineteen-year-old Margaret Ingersoll, a resident of Marietta, Georgia, a suburb of Atlanta. She may not have been a servant in her own home, but as a cashier, she wasn’t a princess either. Still, her grasp of personal hygiene was solid enough to avoid the sobriquet Cindersoll. 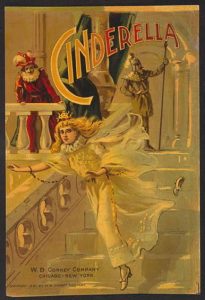 Also not our Cinderella story. A creepy 1897 illustration for a children’s book cover from the Library of Congress.

Once upon a time, on a hot and humid June evening, every head in Marietta’s local restaurant swerved to look as two strangers walked through the door. Conversation stopped as a pair of pertinacious and presumably sweaty detectives asked if anyone knew a Margaret Ingersoll.

The gossips immediately set to work speculating on what she could have done to bring this kind of attention to herself. Petty theft? Public intoxication? Maybe even. . . prostitution? After what happened with her father, well, they always knew she would come to no good. Finally, someone pointed to the young woman behind the counter.

Rather than presenting her with a glass slipper to verify her identity, the detectives took Margaret at her word when she introduced herself. Much to the disappointment of the curious crowd, instead of producing a warrant for her arrest, they told her they had some good news and some bad news. Which did she want first? 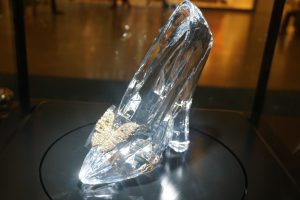 Not a valid form of ID. Photo by TSTS Sheng.

Margaret braced herself for the bad news. After taking deep breaths, the detectives regretted to inform her that her father had passed away. History doesn’t tell us much about the elder Ingersoll, only that he left his family to make his fortune out west. As we have to draw our own conclusions, I’m keeping with the fairy tale theme and assuming there was an evil stepmother involved.

Regardless, after Margaret finished sobbing, fainting, cheering or whatever reaction was appropriate under the circumstances, the detectives were less regretful to inform her that before he died, her father had appointed prominent New Yorker Joseph Hodges Choate as executor of his will. 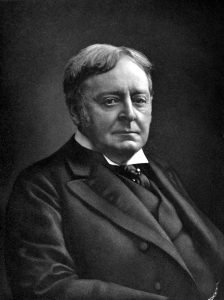 “That’s nice,” she said, “but how is that good news?” Margaret might have been more enthusiastic if she had been able to pull up his fascinating biography. We’ll get back to him another time.

“We’re getting to that,” the detectives assured her. For the past two years, this fairy godfather had scoured the nation looking for her. Whatever her father’s reasons for leaving Margaret behind, he hadn’t forgotten about her at the end and had willed her the fortune he made out west. This is a fairy tale, after all. Margaret’s prince was not a person but an inheritance of anywhere between $500,000 to $1 million, depending on the source. For the financially minded, that’s between $12 million and $26 million in today’s dollars.

Unfortunately, the detectives could not explain how he made his fortune, lost track of his family or became acquainted with a famous New York lawyer while out west striking it rich. None of these lingering questions bothered Margaret.

Throwing off her apron, she said something along the lines of, “See ya, suckers,” and skipped out of the restaurant with a detective on either arm. The last we hear of her, she was being whisked north to New York to claim her fortune, doubtless before it turned into a pumpkin. And she lived happily ever after. The end. 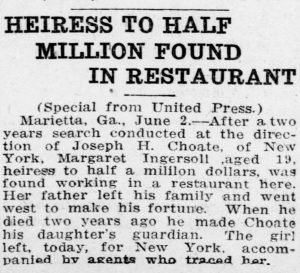 I don’t know about you, but I think Cindersoll’s story has the makings of a future Disney movie. . . or at least a comeback vehicle for Hilary Duff.

Disclaimer: The modern era is far from the first to grapple with rampant “fake news.” As I am neither a historian nor journalist, I make no claims about the accuracy or lack thereof of the above historical articles. I assert only that they make for a good story.