A History of Manspreading

Odds are, those of you who frequently ride public transportation have at some point been the perpetrator or victim of manspreading. The practice of taking up more than one seat by sitting with your legs wide apart has been the subject of fierce public debate, spurring poster campaigns in New York City and Seattle and an outright ban in Madrid. Someone even had the time to delve into its scientific causes.

Although the term may not have entered the general lexicon until 2014, a gem of a letter from Mary Stewart, published in the Seattle Star in 1913, shows that both discourteous and disgruntled riders have been around as long as public transportation has existed to bring them together:

As one who is compelled to take the early car in the mornings, I would like to protest with many others against human hogs occupying the whole of the aisle space with their abnormally large and muddy feet. These semi-human beings ought to have an Everett True to teach them that all of space is not theirs. It is impossible for a lady to pass down the aisles of these cars when the weather is good, and these would-be signboards are dry and fairly clean, but, in this muddy weather it is almost enough to give one hysteria.

And considering she lived in Seattle, muddy weather was presumably the norm. Manspreading isn’t looking so bad after all. 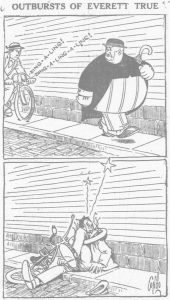 Fortunately for her fellow passengers, Mary seems to have confined her outrage to a letter and didn’t take matters into her own hands. However, her wish for a modern-day Everett True may have finally come to pass: A Russian law student recently made headlines for pouring a bleach mixture onto manspreading train riders in St. Petersburg. Manspreaders, beware. 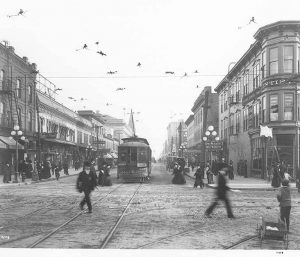 Seattle, 1909. From the University of Washington Libraries, Special Collections.

Disclaimer: The modern era is far from the first to grapple with rampant “fake news.” As I am neither a historian nor journalist, I make no claims about the accuracy or lack thereof of the above historical article. I assert only that it makes for a good story.