On January 12, 1912, Abner and Mary Hammond stepped off a ferry in San Francisco and did what courageous people have done since the dawn of time: They left their old lives behind in search of a fresh start. It wasn’t a unique story. What made them notable, according to the newspapers that covered their arrival, was their age: 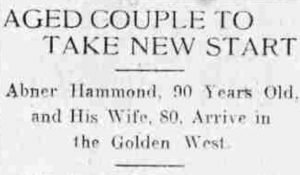 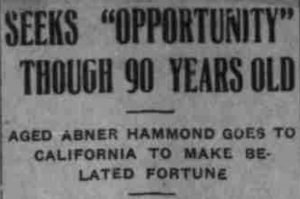 Some were blunter than others:

Despite the naysayers, these “aged adventurers” had traveled across the country from Lyons, New York in hopes of starting a little farm. But their story gets better: This wasn’t even their first attempt at a new life.

Four years earlier in 1908, newspapers reported that the presumably same Abner and Mary Hammond, aged 78 and 67, were on a journey from Texas back home to Pewaukee, Wisconsin. While living in Pewaukee, the Hammonds had apparently “read in the papers about Texas, about the cotton fields, the sunny southern climate, the magnolia blossoms, the land of fruits and berries, and they decided that such a garden would be the ideal place for spending their last days together.”

So, they sold their home and made the move. I’m not sure whether to praise their optimism or admonish them for believing everything they read.

Texas was not our garden. . . The hot winds blew each day; the rainy season ruined our little crop; the fruit and berries did not appear. Our money gave out. We both became ill. We got to our last dollar. Then we suffered.

The couple decided to return to Pewaukee, where their five children were buried. Without money for train tickets, they reportedly walked hundreds of miles until they reached Leavenworth, Kansas, “their feet lacerated and sore from walking the railroad ties.” Someone get this couple a sneaker sponsorship deal. Or just some sneakers.

In Leavenworth, good Samaritans bought them train tickets to Des Moines, Iowa. The last we hear of the Hammonds in 1908, similarly kind souls in Des Moines were making arrangements to help them with the final leg of their odyssey. (Apparently, no one suspected the Hammonds were a pair of brilliant con artists crisscrossing the country on someone else’s dime—I’ll just keep that sneaking suspicion to myself.)

It’s our last trip together. . . we want to get back to our old home, where friends will care for us till we die. It’s been an awful journey.

But as we know, it wasn’t their last journey. As best I can tell, the newspapers lost track of the Hammonds after their arrival in California in 1912. For those as partial to happy endings as I am, let’s agree they got their little farm, grew lots of berries and enjoyed the sunny climate and each other’s company for many years.

San Francisco from the Ferry Building in 1906, from the Library of Congress.

If you’ve made it this far, welcome to Second Glance History. Please don’t run away—I promise most posts won’t be this long.

This blog seeks to uncover the people and stories forgotten by history and give them another read through a modern lens. Big stories, small stories, happy stories, sad stories, amusing stories, quirky stories—stick with me long enough, and I hope to dig up something for every palate.

Many of these neglected stories come from the Library of Congress’ collection of digitized newspapers, the majority of which are from the late 19th and early 20th centuries. Equally compelling tales are found in obscure books, random articles and other dusty corners of the internet. Although I am not a trained historian, I approach each story with a deep curiosity and research the facts and context as well as any internet-savvy non-professional.

Like Abner and Mary, I find myself turning over a new page in life and searching for the words to write my next chapter. Second Glance History is my effort to creatively translate a passion for untold stories into a 21st-century medium. I hope you’ll join me every other week as I discover tales from bygone eras and seek out the common threads connecting the “then” to the “now!”