In her nearly 15 years crisscrossing England on horseback, Celia had survived roadside accidents, lousy weather and overpriced meals at the 17th-century version of a tourist trap—but highway men were a first. A few miles outside the town of Whitchurch in Shropshire, two men had burst from the dense woods and onto the road. Judging by the pistols they tried—and failed—to conceal in bundles, they weren’t looking for directions.

Although her travels had taught her to keep an open mind, even Celia couldn’t help but be suspicious when they steered their horses right beside hers, separating her from her two servants and sole road trip companions. Even without clearly marked passing zones, this was aggressive horse riding.

Just when Celia was about to open her mouth and ask if they were familiar with ye old concept of personal space, they fell back and whispered to each other. For a while, at least. After they repeated the maneuver several times over the next few miles, Celia almost wished they’d just get on with it. She had sightseeing to do. 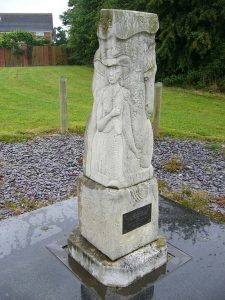 The Celia Fiennes Waymark in the village of No Man’s Heath commemorates Celia’s journey and her encounter with the highwaymen. Photo by RHaworth.

Before Anthony Bourdain introduced us to cuisine and culture from all over the world with a side of sass, before Rick Steves shamed us for overpacking and especially before everyone documented their every move on Instagram, there was Celia Fiennes.

Born in 1662 to a privileged family, Celia bucked the conventions of her time and took to the road in 1684. She didn’t stop until she had seen most of England. In 1702, she turned her notes into a travel memoir detailing her impressions of the places she visited. Although it was later published in the 19th century, she wrote it exclusively for private reading within her family, and her introduction cautioned readers not to “expect exactness or politeness in this book.”

She didn’t disappoint on the latter. Of her trip to the spa town Harrogate in North Yorkshire, she complained:

There is the Sulpher or Stincking spaw, not Improperly term’d for the Smell being so very strong and offensive that I could not force my horse Near the Well.

– Celia Fiennes, Through England on a Side Saddle in the Time of William and Mary

That’s not to say she wasn’t impressed by anything she saw in her travels. While touring the royal apartments at Hampton Court, she wrote about “a Closet yt Leads to a little place wth a seate of Easement of Marble wth sluces of water to wash all down.” Celia had just discovered the wonders of flush toilets.

Fortunately for Celia and her future readers, her journeys didn’t end on the road to Whitchurch. As luck would have it, it was market day, and the closer she drew to town, the more people she met on the road. The would-be bandits, apparently unfamiliar with the bystander effect, eventually rode off, leaving Celia to make her insightful, snarky observations in peace. 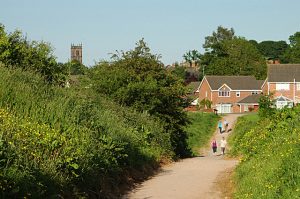 Footpath into Whitchurch. Photo by Row17.