Blabbing with a Buccaneer, Part One

Like many women—and men, too—on occasion, I’ve fallen prey to the charms of an archetypical “bad boy.” What can I say? A few tattoos, a motorcycle and a hint of an attitude problem make for an inexplicably attractive combination.

Swashbuckling pirates might just be the original bad boys: They seek out adventure and danger, they operate on the wrong side of the law, and the word “commitment” isn’t in their colorful vocabulary. Just replace the motorcycles and leather jackets with ships and parrots.

No one better exemplifies this alluring blend of traits than Captain Jack Sparrow, who showed thirteen-year-old me that pirates could be charming, handsome, mysterious, savvy and capable of selflessness if my life were at stake, just as long as I was willing to overlook some personal hygiene shortcomings. The “Pirates of the Caribbean” franchise may have floundered in recent years, but my fascination with pirates has persisted.

. . . Which is a long-winded way of introducing today’s post. To celebrate International Talk Like A Pirate Day, we’re sailing with the so-called Scourge of the West himself, the privateer known as Laurens Cornelis Boudewijn de Graaf. Despite that mouthful, Laurens, who was born in the modern-day Netherlands around 1653, was well known during the Golden Age of Piracy. A real-life pirate of the Caribbean, his career is just as interesting as any of Captain Jack’s exploits.

Since I have not (yet) dated a pirate, I have to content myself with interviewing one. Pirates are not known for leaving behind extensive paper trails, and any of Laurens’ captain’s logs have long since disappeared into Davy Jones’ Locker. The “conversation” below is based on sparse, unreliable and contradictory information floating around the Internet, with imagination filling in the gaps.

Without further ado, let’s dive in. 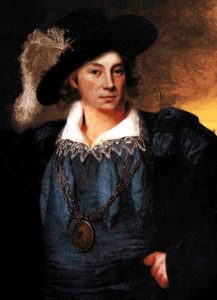 A purported portrait of Laurens de Graaf from Wikimedia Commons. Am I the only one swooning?

Thank you for being with us, Captain de Graaf. What drew you to a life at sea?

It was the high seas that chose me! Pirates have to be strong, fearless and savvy, and you won’t find anyone sailing the Seven Seas whose LinkedIn profile is a better match than mine. It’s all about the branding.

And, between us, the perks aren’t half bad. I mean, freedom, adventure and treasure? Come on! No other 17th-century profession comes with benefits like that.

Tell me about your childhood. How did it prepare you for your career?

Every larger-than-life legend needs a tragic origin story and a healthy disregard for authority. But let me tell you, my nonexistent childhood could give even Batman a run for his money.

When I was just kid, those scurvy dogs—the Spanish—kidnapped me and dumped me on the Canary Islands. I worked on their plantations for years without toys or video games. We didn’t even have WiFi! Finally, in the 1670s, I broke free, sailed west and signed up for a really good Internet package. And, of course, swore vengeance on those who had wronged me.

Nothing cliché about that. What was your first break?

You know I hate to brag—but if you insist, let me tell you about my first attack on Campeche, in modern-day Mexico. It was spring of 1672, and I was fresh from the Canary Islands.

I opted for a two-pronged sneak attack. They said I was crazy, but I knew it was go big or go home. I had my crew slip into the city and burn down a partially built ship. While they were doing that, I sailed into the harbor, guns blazing. You should have seen the guards running at the sight of me! Some people call me a pirate prodigy, but that always makes me blush. Let’s just say my reputation was already preceding me.

Sure, there was a little luck involved. But just a little. The next day, a merchant ship sailed straight into the harbor. It hadn’t gotten the memo about Campeche’s change in leadership. Oops. I gave it—and its hundreds of thousands of pesos—a warm, pirate welcome. My career was off and running. 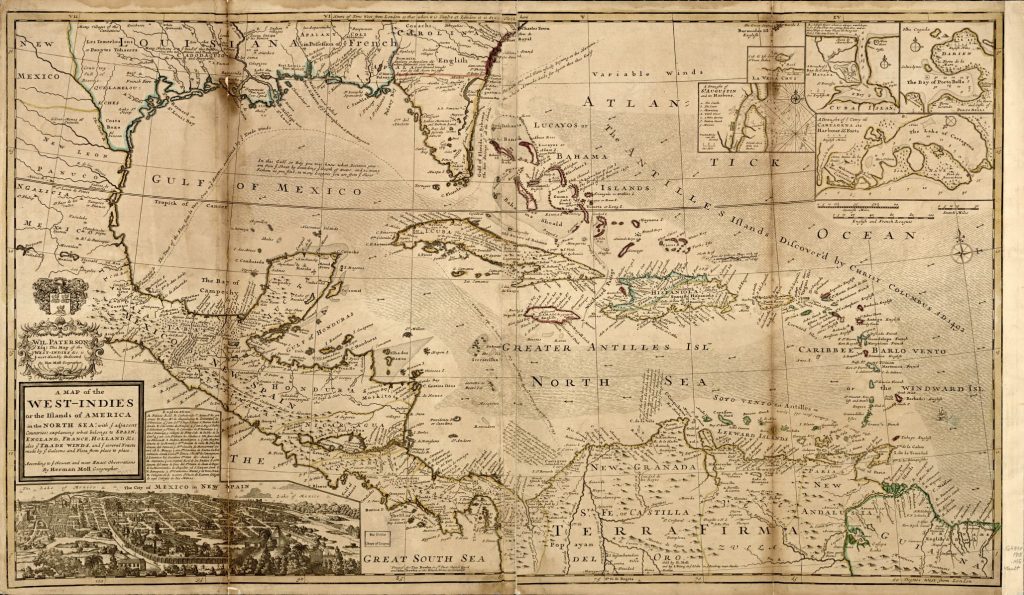 A map of the Caribbean from 1715 from the Library of Congress.

Let’s talk about your family life. Where did you meet your wife?

Which one? A gentleman never tells, but women seem to dig the pirate thing.

I met my first wife, Petronilla de Guzmán, while I was still in the Canary Islands. With a name like Petronilla, I should’ve known she’d be high maintenance. It wasn’t long before we reached the “irreconcilable differences” phase of marriage, and I packed up and made the move to the Caribbean.

It’s hard to commit when you travel as much as I do. Sure, I had girlfriends in every port, but something was always missing. Then, I met Anne Dieu-le-Veut. She’s the smartest, most beautiful woman in the Caribbean. No, the whole world! Please tell her I said “the world.” If you don’t, she might actually kill me.

Anyway, she was married, so we kept it casual for a while. But in 1693, we had our first—and last—fight. As I recall it, I’d just killed her husband in a bar fight. According to her, I’d insulted her.

Either way, she challenged me to a duel. At the time, she was pregnant with our first child. You know what pregnancy hormones are like. Since ice cream wasn’t yet a thing in the Caribbean, I went along with it just to make her feel better.

Then, like all couples, we had a minor miscommunication: I drew my sword, thinking we were sparring. But she reached for a gun. [Editor’s note: As best I can tell, she was not a great-great-grandmother to another Anne who also grabbed her gun. But it would be awesome if she were.]

At that point, my instinct for self-preservation, er, chivalry took over, and I threw down my sword. A gentleman doesn’t fight a lady, even if she is hormonal. Instead, I asked her to marry me.

Was she still holding a gun to your head?

No comment. Anne is very efficient and had already sailed through the five stages of grief for her deceased husband. She said “yes,” and she—we—wasted no time in tying the knot. Tying it really, really tight. . . Moral of the story: Pick a partner who challenges you. Literally.

After we were married, Anne didn’t trust me alone on my voyages. Uh, I mean, she bravely volunteered to assist me on my raids. She started chaperoning—helping—me, and now, she’s an even fiercer pirate than I am. You have to tell her I said that! 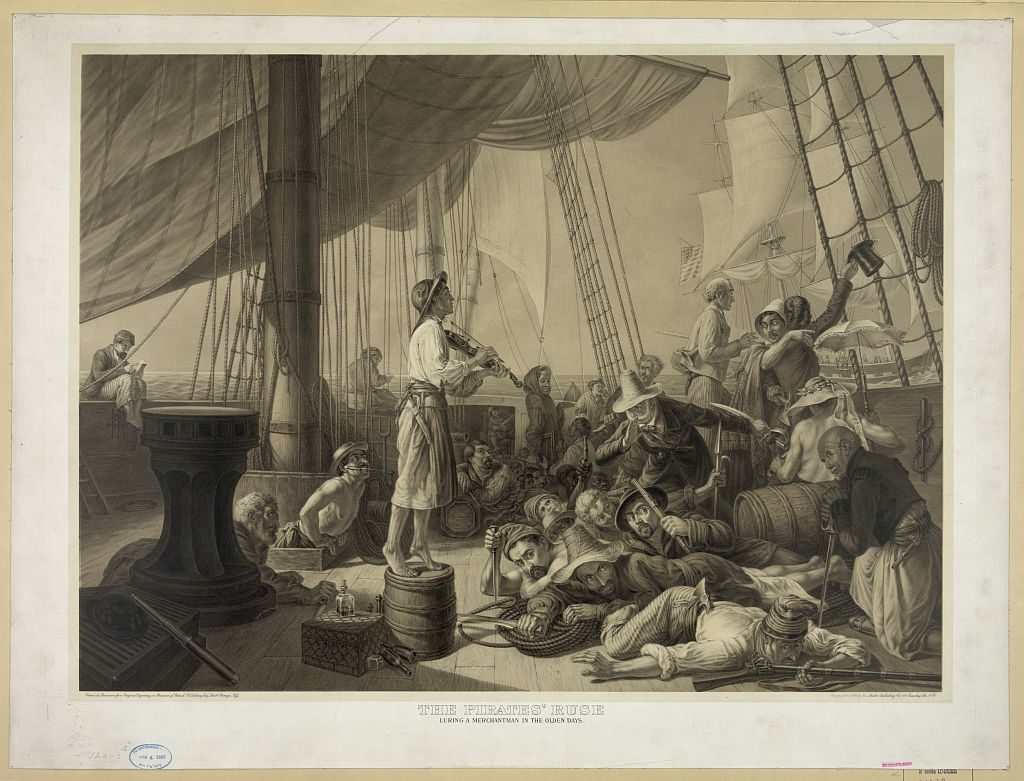 “The pirates’ ruse luring a merchantman in the olden days” from 1896. Something tells me Laurens never tried this particular ruse. From the Library of Congress.

When did you know you’d made it as a pirate?

You don’t get to be a renowned pirate in the Golden Age of Piracy without making a few enemies along the way. But nothing says swashbuckling success quite like half the Caribbean chasing after you.

In the early 1680s, Henry Morgan, the lieutenant governor of Jamaica, sent a warship and a certified pirate hunter to track me down. “A great and mischievous pirate,” I think he called me. That’s rich, coming from a privateer who sacked a string of cities between Cuba and Venezuela before selling out and joining the English political establishment. He’s as piratey as you get! His face was made for a rum bottle. And if he thinks he’s better than the rest of us just because some king made him a knight— 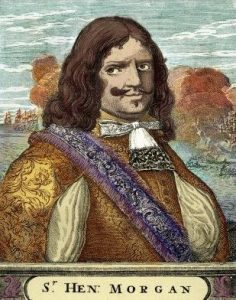 Let’s get back to your enemies. Who else was after you?

Right. Many, many important people. Spain had the infamous Armada de Barlovento prowling around the Caribbean looking for me. And let me tell you, that armada is no joke. These aren’t little sailboats; we’re talking fifty warships. It would be enough to turn anyone else into a landlubber.

Haters gonna hate. But we had history. In 1679, I cunningly attacked one of the armada’s warships, and in no time at all, it was mine. I renamed it Tigre and made it my flagship. Talk about embarrassing. Honestly, I’d still be a little sea salty, too. Sea salty, get it?

Hilarious. What did you do next?

I may be a pirate, but I’m no coward. I wasn’t going to skulk around the Caribbean waiting for the Spanish to find me. Laurens de Graaf hides from no one! Besides, it was just about time to trade up. The Tigre was a fine vessel, but I was ready for a newer model.

So, I set sail to find them, and when I did— 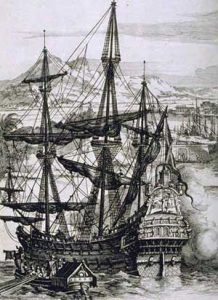 Sorry, folks, that’s all the attention span we have for today. Tune in next week for the final installment of the interview, and find out who wins in “The Spanish Empire Strikes Back,” as well as what happens when pirates unite to form a supergroup. Until then, smooth sailing!