Blabbing with a Buccaneer, Part Two

Ahoy, mateys! Welcome to the second and final chapter of my imagined interview with an unsung pirate of the Caribbean, Laurens Cornelis Boudewijn de Graaf. If you’re just coming onboard, be sure to catch up on Part One. 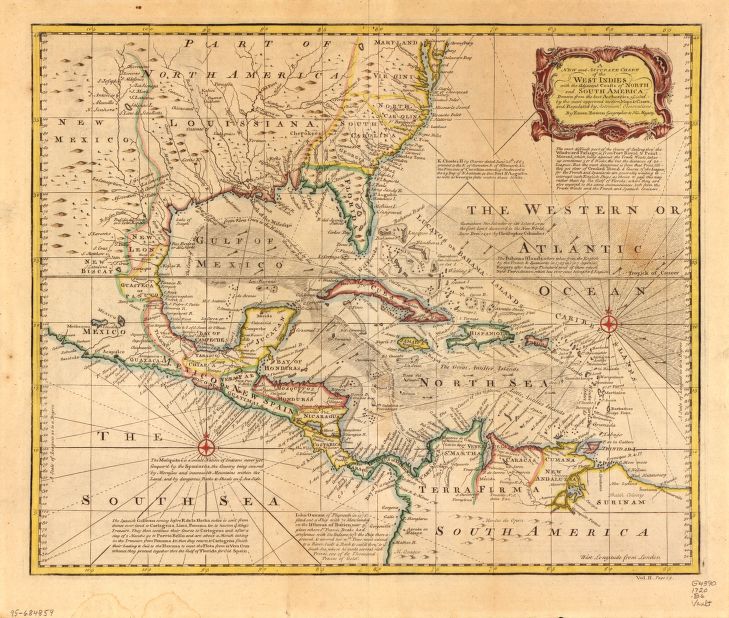 A 1720 map showing the routes of Spanish treasure fleets in the Caribbean from the Library of Congress.

Welcome back, Captain de Graaf. You were just telling us what self-aggrandizing feat you performed after tracking down the Armada de Barlovento in the 1680s.

Naturally, I attacked. “Take that, you kidnapping scallywags!” Ahem. Excuse me. My therapist and I are working on my anger issues.

Anyway, it was a fierce fight. Cannonballs and peg legs were flying everywhere. But when the smoke cleared, the Princesa, the Spanish ship, had lost fifty men. Guess how many I lost? Just eight. Okay, maybe nine. But still! The Princesa struck her colors, and I had a new ship, plus the 120,000 sparkly new pesos of silver she was carrying. That’s what we in the industry call serious pirate booty. De Graaf, 2; Spanish Armada, 0.

But don’t get the wrong idea. I’m a good winner, and unlike some pirates I could mention—cough, Henry Morgan, cough—I’m not a monster. When I heard the Princesa’s captain was seriously injured in the battle, I put him and his surgeon in a boat bound for shore. I’m the whole pirate package—brave, fierce AND magnanimous. Make sure you put that in.

Noted. Your relationship with the Spanish is clearly contentious, but how do you get along with other pirates?

That’s a toughie. Pirating can be a team sport, but it’s also really competitive. Unlike those bloodless “sports” where you prance from one side of the field to the other, your teammates can turn into your adversaries and back again in a heartbeat. Take it from me: Never trust a pirate as far as you can row him out to sea.

Take Veracruz. It’s 1683, and I’m hanging out with a buddy in the Gulf of Honduras. One day, we spot these merchant galleons just floating around, completely unprotected. They’re calling my name. We’re about to do our pirate thing, when all the sudden, I notice they’re empty. “Avast!” I say. “Stop the attack!” The light bulb goes off, and I realize those ships are waiting to be filled with treasure. So, instead of taking them right then and there, we hide and wait.

All the sudden, out of nowhere, that bumbling idiot Nicholas van Hoorn shows up and ruins everything. He captures the empty ships and then has the nerve to ask me to partner with him on some half-baked attack. I tell him to go walk a plank.

“But, Laurens,” he says, “You’re the best pirate ever. We need you.” I’m just about to draw my cutlass and show him why I’m the best pirate ever, but then he says, “It’s Veracruz we’re after.” That’s a low blow. You know who runs Veracruz. So does van Hoorn. He knows I can’t resist a chance to hornswaggle the Spanish. So, just like that, I’m in. Somehow, van Hoorn manages to sweet talk seven of us captains into teaming up. Watch out, Veracruz.

One of those captains and I park our ships out of sight of the city. We keep a low profile and creep towards Veracruz. Then, before the sun comes up, while everyone in the city is sound asleep, we sneak in and destroy the defenses. We did better than the Greeks in Troy; we didn’t even need a giant horse! Then, van Hoorn finally does something right and sails in with the reinforcements. With no defenses, we have a jolly good time ransacking the city. 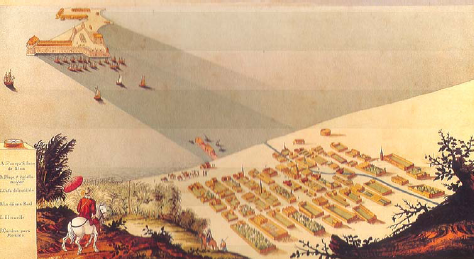 It sounds like you’re the pirate version of the Avengers, if the Avengers pillaged and plundered, and raped and murdered innocent civilians.

Psh, the Avengers. What a waste. If you have all that power, why use it to save ungrateful people over and over again instead of hunting for treasure? Pirates are a lot of things, but at least we have our priorities straight. Well, until we all get together. Then, even I have to admit we start to look more like a temperamental ’70s rock band than a bunch of superheroes.

Anyway, it doesn’t take the Spanish long to get wind of our little adventure. When their ships sail in, we hit the road, er, sea, along with a few hostages. We hole up nearby and wait for the ransom to arrive. But some people never learned that patience is a virtue. When the ransom doesn’t show up right away, van Hoorn gets a little antsy—and a little stupid. He starts executing hostages and sending their heads to Veracruz.

When I hear about this, I’m like, “what the hell, van Hoorn?” As if us pirates didn’t have enough of a PR problem. Besides, do you have any idea how hard it is to get blood out of clothes without a washing machine?

At this point, I’ve had it with van Hoorn. First, he steals the ships I was going to steal, and now, he’s cutting into my profits; no one’s going to pay for a headless corpse. So, I challenge him to a duel. We draw our swords, and before you can say, “shiver me timbers,” it’s game over. I give him a slap on the wrist, literally, with my sword, and send him back to his ship in chains. And that was the last time van Hoorn got in my way.

Because you killed him, right?

Technically, it was the gangrene from the cut that killed him. Infection is an unfortunate occupational hazard. 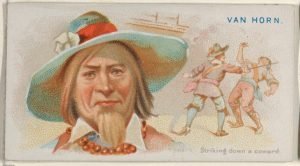 Dead men tell no tales. An 1888 illustration of Nicholas van Hoorn, created for a tobacco card sold by Allen & Ginter Cigarettes, from the Metropolitan Museum of Art.

Pirating sounds like an intense profession. How do you balance work and family?

With a little help from my friends. . . or rather, my enemies. Nothing clears your schedule like having your family kidnapped and held hostage.

Back in 1694, I may have launched a teeny, tiny attack on English-held Jamaica with just a few hundred of my best friends. In retrospect, we might have had a little too much fun plundering the countryside around Port Royal.

The next year, the English were allied with the Spanish, and you know what sore losers they are. The two of them joined forces and swarmed my headquarters. Resistance would have been futile. So, I heroically retreated and lived to fight another day.

Unfortunately, in the rush, my wife, Anne, and our children were accidentally left behind. You know how it is! You’re packing lunches, tying shoelaces and trying to get everyone where they need to go, while guns and cannons are going off all around you. I swear it only happened once! I’ve still got a better track record than the parents in the “Home Alone” movies.

Anyway, they hung out with the Spanish for a little while after that. 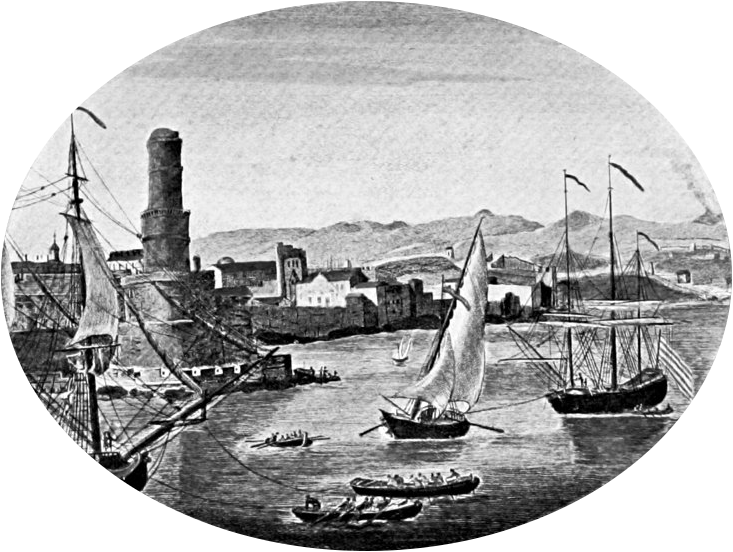 How long were you separated?

Only three years. Don’t look at me like that! They were totally fine. They were released—completely unharmed—in a prisoner exchange. Although I’m still fighting with my insurance company to get the Spanish to pay for all the therapy for everyone’s abandonment issues.

What prejudices do you encounter in your line of work?

When people find out I’m a pirate, they think I’m a Captain Hook knockoff who spends his days running away from crocodiles. They assume I’m uncouth and have poor hygiene. Nothing could be further from the truth.

I still have all my own teeth, thank you very much! People compliment me on my spiked mustache all the time. And you won’t find a more cultured pirate on the Seven Seas. Just ask my crew! I bring violins and trumpets on all my voyages to relieve stress. Although, you might have to ask loudly, as they tend to put in earplugs whenever I start to play. Philistines, every one of them.

But what hurts my feelings the most is the assumption that I’m some kind of villain. I’m a nice guy! Of course, I’m fierce and brave, but I have manners. Take my 1683 attack on Cartagena, in modern-day Columbia. Yes, I fired on three Spanish warships and their 800 troops over the holidays. Not very festive, I admit. But after I routed the Spanish and captured all three ships, I released a lot of those Spanish prisoners and sent them back to Cartagena on Christmas Day. I even sent the governor a thank you note for my new toys! Does that sound like something Captain Hook would do? Or Henry Morgan? I don’t think so. Let me tell you what that scoundrel Morgan did in Cuba—

Thank you for setting the record straight, Captain de Graaf. Best wishes on your next voyage. 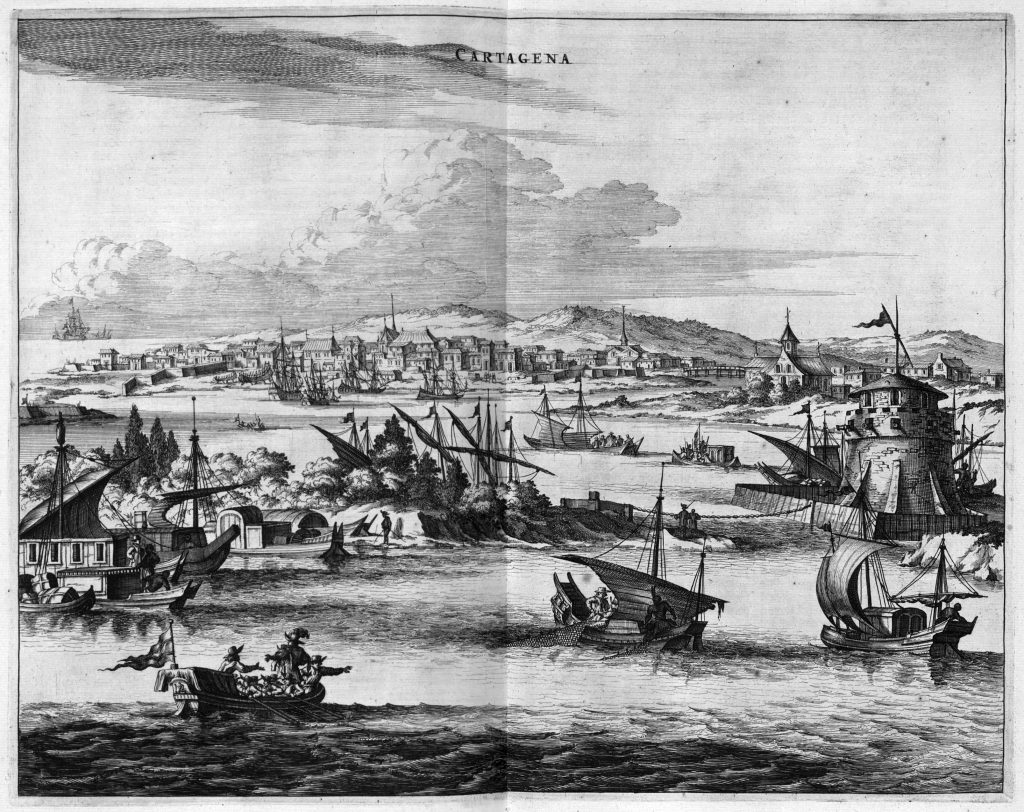 Like its beginning, the end of Laurens’ life is shrouded in mystery. After his adventures in the Caribbean, some records say he settled in a French colony near Biloxi, Mississippi, while others have him living not far from Mobile, Alabama. Then, the trail goes cold. He’s thought to have died in 1704.

He isn’t as well known as some of his contemporaries—real and fictional—and he obviously missed out on Henry Morgan’s lucrative rum sponsorship deal. But if you’re feeling bad for poor ol’ Laurens, take heart. At least he made the cut for a 19th-century cigarette marketing campaign: 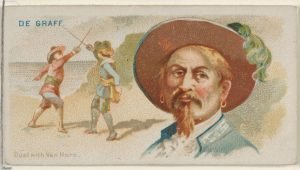 An 1888 illustration of Laurens de Graaf’s duel with Nicholas van Hoorn, created for a tobacco card sold by Allen & Ginter Cigarettes, from the Metropolitan Museum of Art.