Fan mail has been around as long as the postal system itself, and as celebrities of any era could tell you, admirers aren’t shy about making their opinions known. Thanks to developments in technology and communication, it’s easier than ever to reach out to those in the public eye. But given the volume of fan mail these days, how do you make your letter stand out from the rest?

If you’re looking for inspiration from the past, it’s your lucky day. The newspapers of the mid-20th century delighted in writing up some of the truly head scratching messages fans had for the public figures they respected. We’ll never know if any of these letters elicited a reply, but some of their kooky tactics might be worth a shot.

1. Give advice on babies. Take a page from the fans of a young Ronald Regan, especially if you’re an older woman. Celebrity or not, there’s nothing new parents love more than unsolicited suggestions for raising their children. 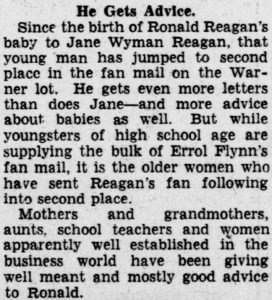 2. Send strange gifts. A crate of prairie chickens, a calf, a litter of puppies, thirteen pairs of suspenders, ninety-eight pounds of peppermint candy, bushels of nuts, a weekly crate of oranges and nearly one hundred jars of homemade jelly were just some of the gifts said to be received by performer and songwriter Eddie Cantor.

These aren’t the puppies sent to Eddie Cantor, but they’re pretty darn cute. From the University of North Texas Libraries.

3. Insult your idol. Not every celebrity has a fragile ego. In addition to listing off his unwanted presents, Eddie Cantor reportedly remarked to his interviewer:

“That big pile is fan mail. I don’t even look at it. The little pile is pan mail—letters telling me I’m rotten. I read every one of them. They’re the important ones to me.”

4. Compliment the recipient on an unusual skill. In today’s toxic political environment, it’s refreshing to read about a public servant receiving kind letters, even if they were mailed more than a century ago. After she took office, Jeannette Rankin, the first woman elected to Congress, was said to be “smothered by” marriage proposals. One of the most creative came from a lawyer-turned-cotton picker who “said he loved Miss Rankin from the moment he heard she could make her own hats.”

However, the mailbag didn’t always have such pleasant tidings for Representative Rankin. She was widely condemned for voting against the United States’ entry into both World War I and World War II. 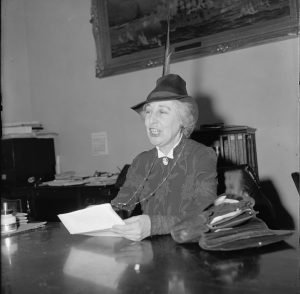 Representative Jeanette Rankin in 1939, presumably reading something more important than her many marriage proposals. From the Library of Congress.

5. Write to four-legged stars. But don’t expect them to write back. Not even wonder horses like Tony and Tarzan, who became famous in Hollywood’s iconic Westerns, were exempt from fan mail:

“Some of their child friends are convinced that Tony and Tarzan, at any rate, can read letters, that feat seeming far less difficult than the things they see the adored animals do in the course of a picture.” 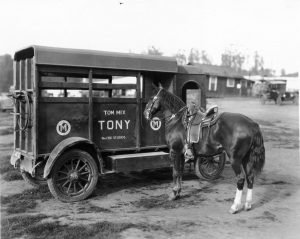 Tony, the (illiterate) wonder horse. From the Gateway to Oklahoma History.

These tips are sure to get your letter noticed. . . although it may not be the kind of attention you were hoping for. Even if you don’t get a personal response from the object of your admiration, as a consolation prize, your off-the-wall missive is sure to be written up in a newspaper somewhere for all the world to enjoy. 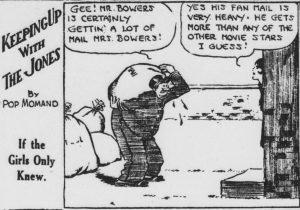