Step 1: Infiltrate the West Virginia State Poultry Association’s chicken show. For the uninitiated, this is a big deal. The annual exhibit brings together “the best of the blue blooded aristocracy of the barnyard” and awards prizes “worth shipping stock a considerable distance to compete for.” With a sales pitch like that, I’m crushed I missed the January 1, 1916 entry deadline. 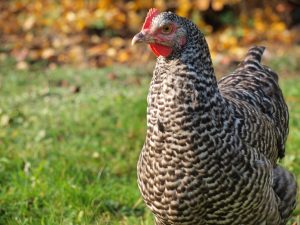 Step 4: When he does, cackle maniacally and pat yourself on the back for a prank well pulled. The poultry association may not be amused, but you’ve made the day of the reporter assigned to cover the show. Sit back and enjoy his or her speculation on your identity and motives:

“It is not known to whom the bird belongs and it is thought that it was sent to the show for the novelty of seeing whether the judge would find it.” 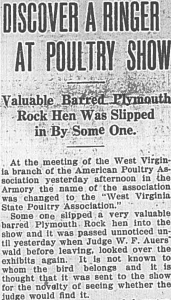 . . . Did I say “greatest practical joke ever?” Apologies for the false advertising—I got caught up in the sensationalized writing of the time. I meant to add “in 1916.” Standards were a little different back then.

Still, the prank must not have ruffled too many feathers (I’m done, I promise), because the very next year, the show was back for its tenth installment, with planners declaring it would be “the greatest one in its history.” No exaggeration there, I’m sure.

Disclaimer: The modern era is far from the first to grapple with rampant “fake news.” As I am neither a historian nor journalist, I make no claims about the accuracy or lack thereof of the above historical articles. I assert only that they make for a good story.