“I did what last night?”

Most of us have asked this question after waking up, heads pounding and stomachs churning, following a night out. No judgement here. Thankfully, few have stories quite as epic as that portrayed in the popular 2009 film “The Hangover.” However, more than a century before four guys walked into a Las Vegas hotel for a bachelor party and walked out with a tiger, a baby and a night of missing memories, two New Yorkers had already beat them to it.

Well, maybe not the part about the tiger. Or the baby. But thanks to the New York Evening World’s trademark sensationalized reporting, we know there were several hours unaccounted for, plus an impromptu wedding, way back in 1893. They’re just lucky digital cameras weren’t around to capture the mayhem for posterity and/or blackmail.

What started out as a fun jaunt quickly devolved into a series of complications that would strike fear into the heart of anyone heading to a boozy bachelor party. Without further ado, here are seven signs your life is the missing prequel to “The Hangover:”

You head to Atlantic City for a night out with your bestie. According to the New York Evening World, our protagonist, Harry Squires, was accompanied by one Albert Lehman to Atlantic City, presumably for a night of carousing. Why Atlantic City instead of Las Vegas? Maybe Harry was worried the desert heat would dry out his skin. Perhaps he was deathly afraid of rattle snakes. Or, it might be because Las Vegas wouldn’t exist for another twelve years.

Atlantic City in 1910, from the Library of Congress.

You use an alias. Our friend Harry was also known to go by H. W. Cromwell. Maybe it had something to do with the stolen bicycle.

You steal a bicycle. A night of fun might not have been all Harry was after in Atlantic City. Maybe he was searching for a fresh start after being accused of stealing a bicycle in New York. A budding entrepreneur, he allegedly sold it in Atlantic City.

Your marriage is shorter than Britney Spears’. Even though Elvis chapels weren’t yet in existence, according to Harry, “while intoxicated Lehman induced him to marry Miss Florence Smith of Philadelphia. He says he met Miss Smith at Snyder’s Hotel in Atlantic City, and after the marriage ceremony lived with her but one day.” Albert sounds like the kind of friend who always takes a practical joke too far.

You skip out on your hotel bill. While the New York Evening World didn’t mention if Harry sprang for the honeymoon suite at Snyder’s Hotel, whatever his accommodations, he admitted to leaving town in a hurry because he couldn’t afford them. His bill? $45. If that doesn’t sound like much, consider that in today’s dollars, it’s a charge of more than $1,200. He should be grateful the hotel proprietor didn’t take a page from “The Hangover” and set gangsters on him.

You’re arrested on a wood schooner in Tuckahoe. Need I say more?

Still, there’s at least one striking difference from the film series: Unlike “The Hangover” Wolfpack, the experience did not solidify Harry and Albert’s friendship: 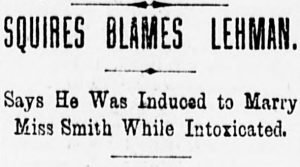 Speaking of Albert, the article reports that his father swooped in and whisked him back to New York. He wasn’t the only one to leave town. As for Mrs. Harry Squires, the New York Evening World tells us, “his bride has gone back to Philadelphia. Squires does not show any inclination to follow her.” That must be the 19th-century equivalent of unfollowing your ex on Twitter.

But what about Harry? Did he beat the bicycle theft charges? Did he pay his hotel bill? Did he ever forgive Albert for being the worst wingman ever? As is often the case with the 19th-century press, we’re left with more questions than answers. Unfortunately, Hollywood doesn’t have a sequel in the works for this blockbuster.