‘Til Death Do Us Part

Much has been written about the divorce rate in the Western world, and psychologists and nosy relatives alike have spent many hours pondering its causes. Although science tells us criticism, contempt, defensiveness, and stonewalling are the most reliable harbingers of a relationship’s end, not all doomed marriages die of natural causes. In fact, if the press is any judge, some grounds for divorces are downright otherworldly.

From Alabama and Illinois to Missouri and New York, 19th-century newspapers were rife with stories of husbands and wives haunted—literally—by their predecessors. Some covered them more seriously than others: 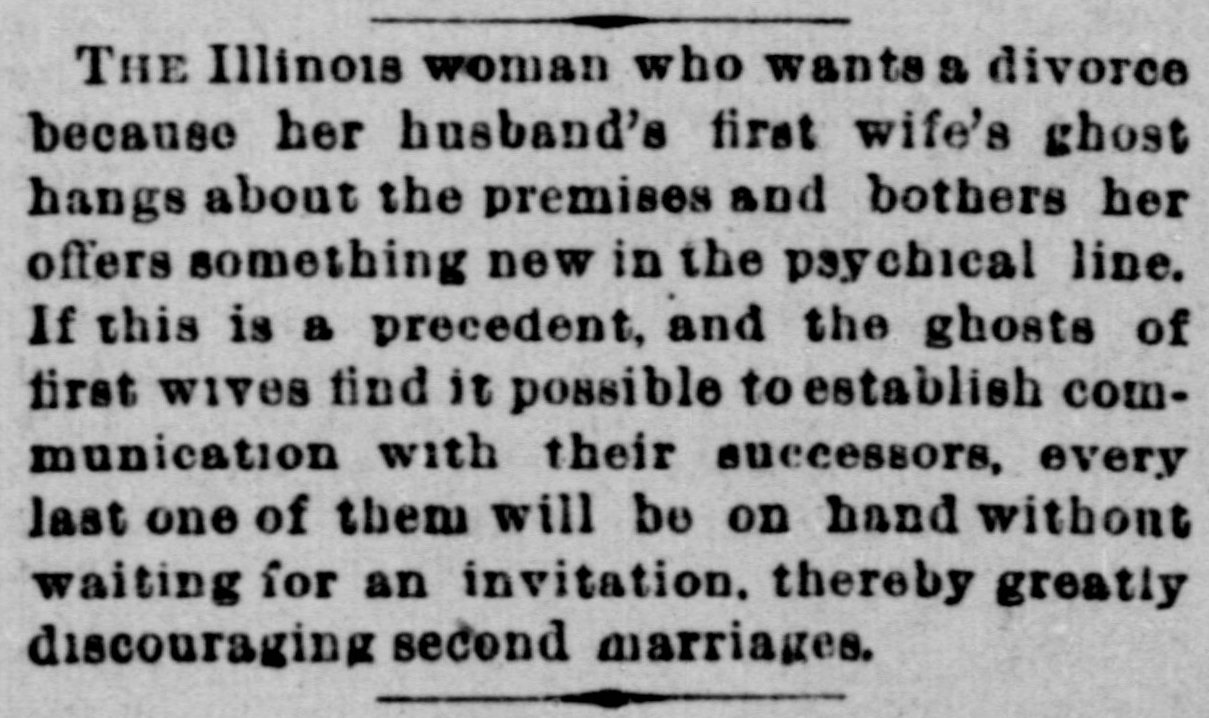 Oddly enough, we don’t see quite as many cases nowadays. Either deceased spouses aren’t as possessive as they used to be. . . or ghosts were a convenient excuse for pursuing a separation in an era before no-fault divorce was the norm. Hm.

In honor of Halloween, gather around the campfire, unwrap some candy and enjoy a good, old-fashioned ghost story based on one of these reported marital hauntings. But beware: It’s just as likely to have you calling a divorce lawyer as an exorcist. 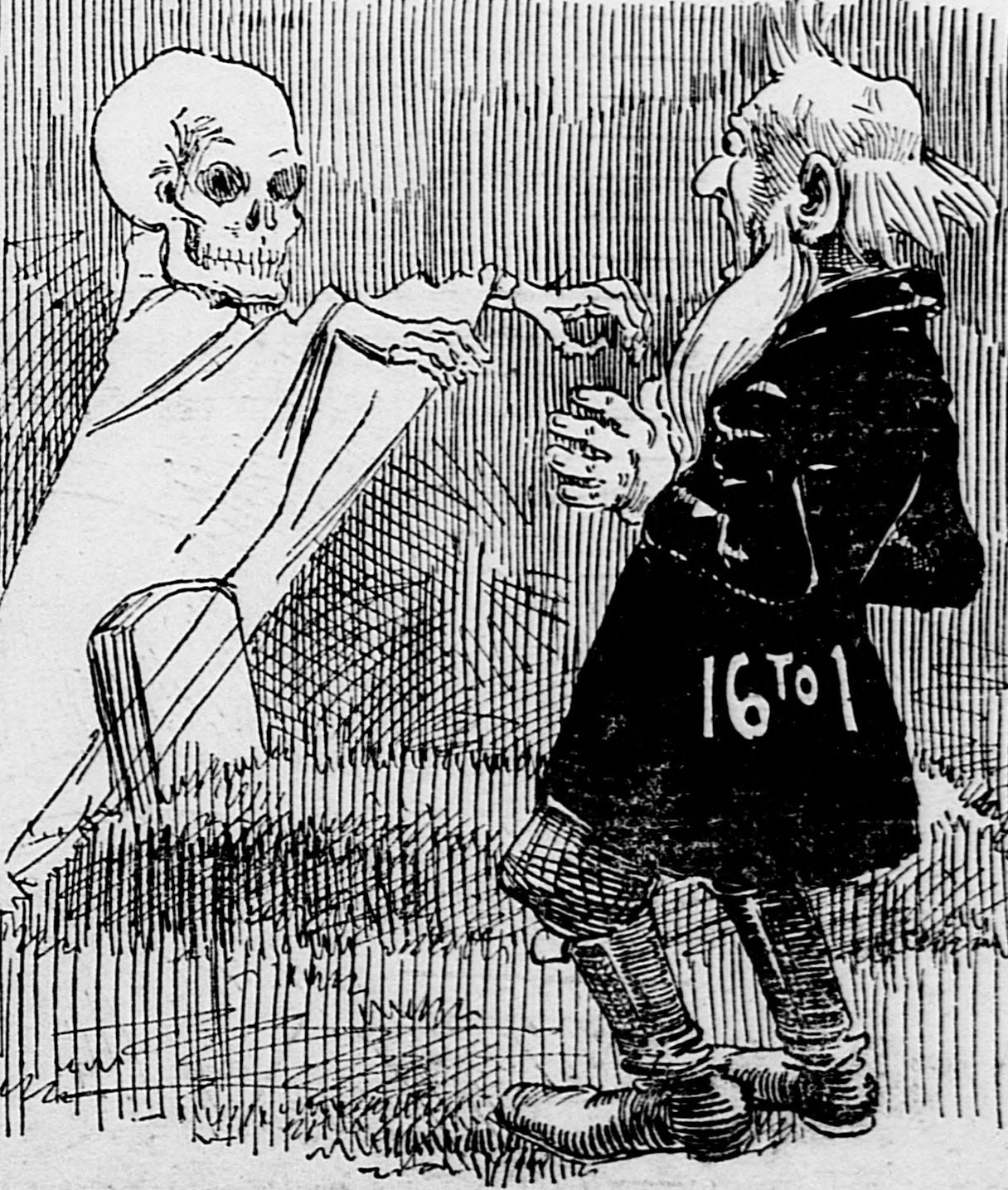 No matter how many times he flipped his pillowcase over to the cool side, Heinrich Dierking couldn’t sleep. And tonight, it wasn’t his wife’s bear-like snores keeping him awake. In fact, her heavy breathing—a reassuring reminder that she was sound asleep—might just be the sweetest music in the world. No, on this chilly October 1878 evening in Brooklyn, it was the words of his barber ringing in his ears and keeping him from sleep. If Heinrich closed his eyes, he was afraid he might never open them again. 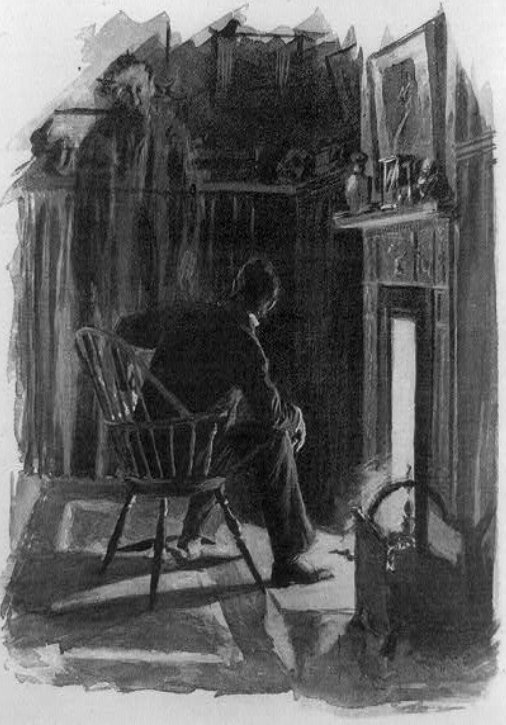 An 1894 illustration by Arthur Burdett Frost from the Library of Congress.

As was becoming his daily ritual, Heinrich sauntered into his barbershop that morning, nodded at the regulars in what he hoped was a distinguished manner and took a seat. Right away, the barber, a man he’d known from the days before he could afford a daily shave, hurried over with a hot towel. “You, again? What, did you win a million bucks or something?”

Charles Schmidt had greeted him with the same line every morning since he’d started his regular visits, but Heinrich hadn’t yet gotten tired of his equally stale retort.

“You mean you need to keep Mrs. Dierking happy.” He thumped Heinrich on the back. “Matrimony agrees with you.”

With a simple “I do,” Heinrich had traded in twelve-hour days at the grocery store for a loving wife and her deceased husband’s saloon, which came fully stocked with all the booze he could drink. It was true that he and Apollonia hadn’t known each other very long before their marriage. But when a mutual friend had introduced him to the older widow, who was looking to remarry in a hurry, he’d taken one look at her bank account and fallen head over heels in love. So far, everything was coming up roses.

“You’ve lasted longer than any of us expected. We had a pool going. Earl figured you’d be a goner after two days, and I said you’d make it a week, tops. But look at you now. Nearly two weeks of wedded bliss, and you’re still here. Thanks for nothing, buddy!” The men in the chairs on either side of Heinrich chuckled.

Despite not knowing what was so funny, Heinrich laughed along. He didn’t want to get a reputation for not having a sense of humor. But after a moment, curiosity got the better of him. “Wait, what do you mean?”

“You know.” Charles gave him quizzical look as he spread shaving cream on Heinrich’s face.

“About the last guy.”

“Old John Gunzer?” Heinrich frowned. He and his wife had a tacit agreement to never discuss her deceased husband.

Heinrich shook his head. The barber shrugged. “It’s nothing. Forget I said anything.”

“Come on, man. You’re making me look bad in front of my new friends.” He rolled his eyes towards the other customers. “You have to tell me.”

Charles sighed. “Did Apollonia ever say how he died?”

“This is the 19th century; you should get new sheets anyway. But, no, it wasn’t anything like that. Gunzer was murdered.”

Heinrich sighed in relief.  “Don’t scare me like that! I thought it was something contagious. What happened?”

Charles shrugged. “A burglar broke in last May while he and Apollonia were sleeping, shot him with his own air gun and jumped out the window. But the cops never found the guy.”

“Or sucks to be married to her. Don’t you read the newspapers?” His voice dropped to a whisper. “Gunzer’s father accused Apollonia of killing him and staging the break-in to cover it up. She was arrested, but they didn’t have enough evidence to keep her.”

All the sudden, Heinrich became keenly aware of the sharp razor against his cheek. “She definitely didn’t mention that before the wedding.”

“Something to talk about at dinner tonight.” Charles wiped the last of the shaving cream from his face. “All done. See you tomorrow!”

Heinrich gulped. “I hope so.” 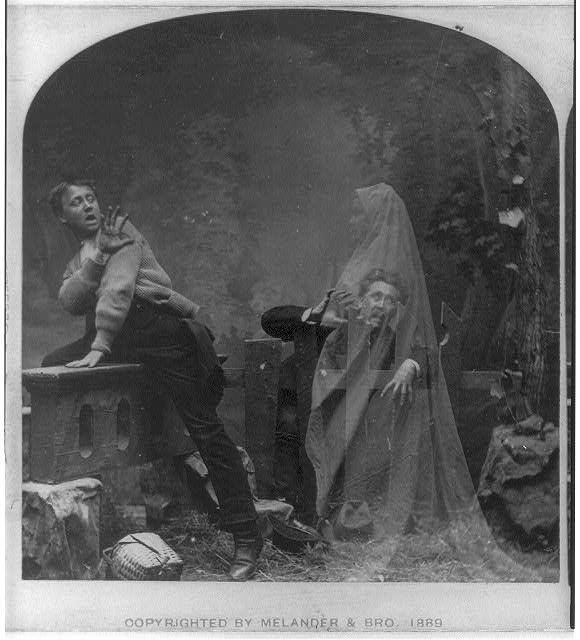 What’s scarier in this 1889 posed studio scene: the ghost or the overacting? From the Library of Congress.

Now, lying next to his wife in the dark, Heinrich broke out in a cold sweat all over again. He should be exhausted from doing the cooking, washing the dishes, giving Apollonia a backrub, and all the other chores he’d very recently decided to take on around the house to stay in her good graces. Still, he couldn’t forget the barber’s story.

A faint creaking didn’t bring him any closer to sleep. He knew it was his imagination, but that didn’t stop him from pulling the covers up a little higher. The creaking sounded again, closer this time. “Apollonia,” he whispered. “Did you hear that?” Her snores were all the answer he got.

Suddenly, a rush of cold air enveloped him. Heinrich’s eyes flew open, and he found himself face to face with a man. Or at least, what remained of a man. Half his head was missing, and the rest was covered in dried blood. His nightshirt, as translucent as the rest of him, was likewise drenched in dark stains.

Heinrich yanked the covers over his head and waited for the hideous creature to tear him limb from limb and rip out his brain. Or was that zombies? He considered for a moment. What did ghosts do? When Heinrich realized he was still alive to ponder the distinction, he poked his head out and saw his visitor doubled over with laughter. “You—should’ve—heard—your—scream!”

Indignant, Heinrich sat up. “You take that back! I didn’t scream, I gasped. You startled me.” The ghost wiped what appeared to be tears from his single eye. “Who are you?” But he already knew.

“John Gunzer. Or should I say, the first Mr. Apollonia.” The ghost extended a bloody hand. With distaste, Heinrich reached out to grab it, only to see his own hand go straight through it. “Psych!” The ghost sniggered again. “Never gets old.”

“What do you want, Mr. Gunzer?” Although it was hard to tell with half his face gone, the man seemed younger than Heinrich had expected, perhaps only a decade older than himself. Apollonia apparently preferred her husbands on the youthful side.

“Please, call me John.” The ghost smiled amiably. “I want you to leave my home and never come back.”

Heinrich nodded. He’d been expecting this. “You’re here to haunt Apollonia until she goes mad, right? I get it, bro. I’d be pissed, too.”

John raised what was left of his eyebrow. “No, I want you to leave because she’s my wife, and you’re in my bed. If you don’t, you’re the one I’m going to haunt for eternity.”

“Don’t tell me you believe all the drivel they print in the papers.” John shook his head. “I didn’t get a good look at the guy. When you’re bleeding to death, it’s a little hard to focus on anything else. But Apollonia was screaming just as much as I was—although, not as loudly as you just did.” The ghost jabbed him in the ribs. Heinrich felt nothing but winced anyway. “I bet it was my old carpenter. If I ever find that son of a you-know-what, I’m following him straight to hell.”

For the first time that day, Heinrich let out a deep breath. He wasn’t married to a murderess after all. Suddenly, the snoring was no longer charming background noise.

“Consider me gone. If Apollonia will take you back in your, erm, condition—” Heinrich faltered. “Well, I’ll leave you two to work it out.”

“Wait, that’s it?” John’s shoulders slumped. “I had a whole speech and a weeks’ worth of horrific hauntings lined up.”

Heinrich shrugged. “Dude, all I wanted was pocket money and some free drinks. Hauntings aren’t covered under ‘for better or worse.’ And neither is that snoring. I’ll pack my bags and be out of here first thing tomorrow.”

“That’s awfully decent of you.” John stuck out his hand.

“Not again.” Heinrich kept his hand firmly by his side.

“I was just kidding earlier. Come on, let’s shake on it.” Tentatively, Heinrich’s fingers reached for John’s.

“Gotcha again!” John laughed as his digits dissolved. “I’ll be seeing you around.”

“Don’t take this the wrong way, but I really hope not.” Heinrich slept like a baby the rest of the night. 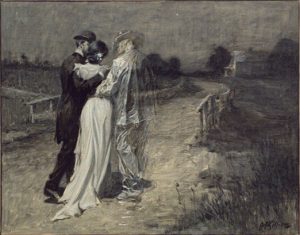 A 1903 illustration by Arthur Ignatius Keller from the Library of Congress.

As the newspapers tell it, Apollonia was not so amenable to a separation as her husband, at one point “producing a club and notifying [Heinrich] that he would get a beating with it if he didn’t toe the mark.” Still, he was apparently more afraid of the ghost than his wife. Heinrich, also known as Henry, ran off to live in Hoboken, New Jersey, and Apollonia later had him arrested for abandonment. However, by 1880, the tables had turned, and he successfully sued for divorce.

Their marriage strikes me as more of a horror story than any ghost tale I’ve ever heard. Happy Halloween! 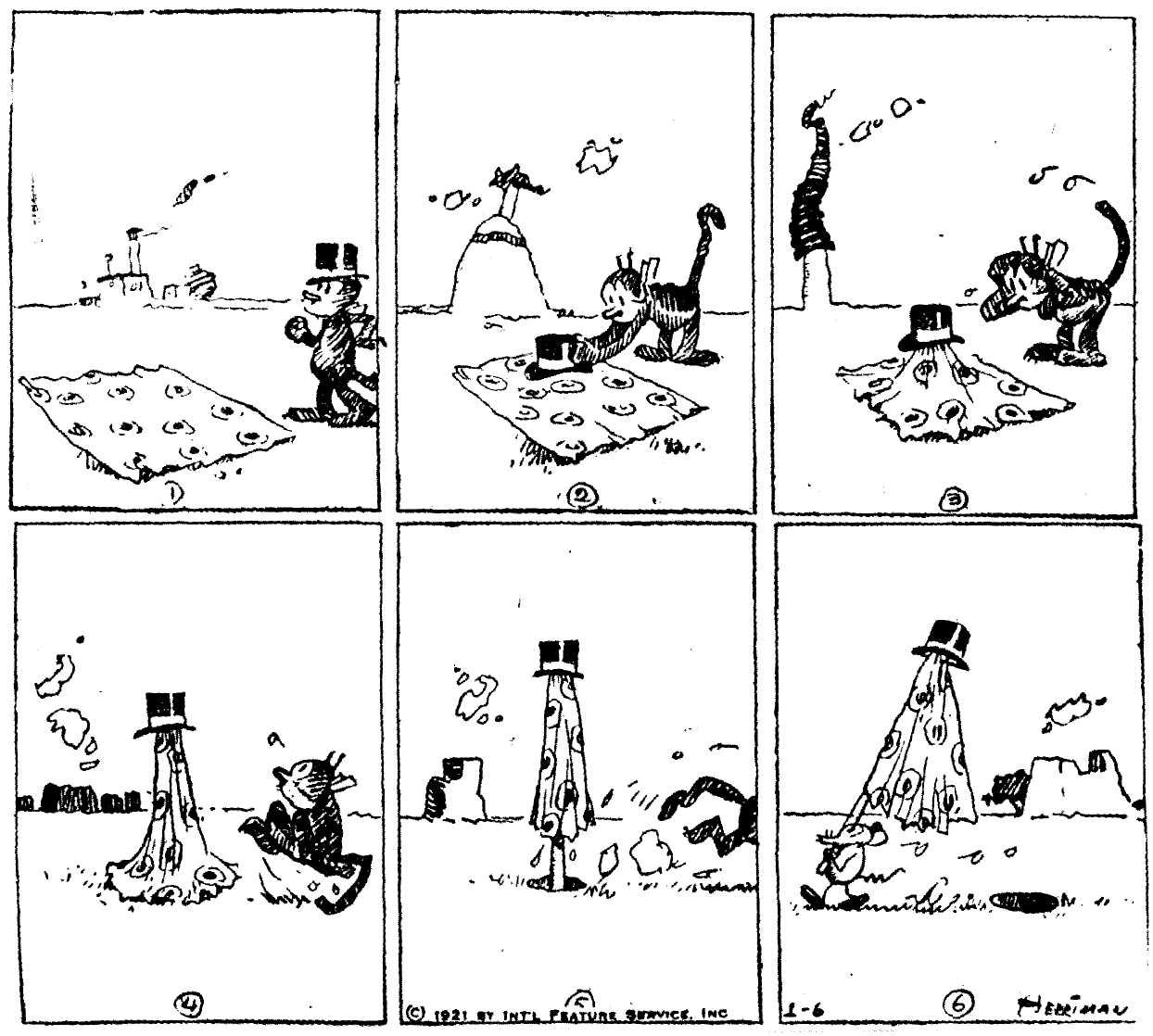